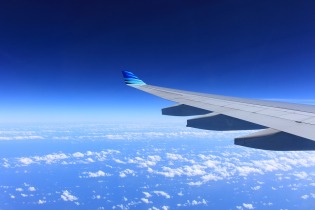 At long last, part two. (If you missed part one, you may want to catch up.)

So, two days after flying into Dulles Airport in Washington, D.C., for my big speaking debut, it was time to fly home to the reality of my mommy existence. First order of business would be feeding my kids the vegetables they were likely missing for the past three days.

Walking into the airport with my trusty companion, I said to her, “It would be nice if I didn’t have to get frisked this time. I’m just not feeling up for that again.”

But it soon became apparent that security at Dulles was no joke, and the likelihood of me not getting frisked was dwindling with each TSA security agent we saw, the first ones being immediately upon entry.

Two were poised and ready to check our boarding passes and wave us through. Then we located our gate number and headed in the proper direction, only to come to security check number two. Here TSA used machines to scan our boarding passes.

Then on to security check number three. Despite the seriousness this place clearly gives its safety, I still held on to some hope I could avoid the pat-down. But once we entered the waving sea of security lines, all hope was lost.

Let me describe for you the security line in San Diego, my beloved city of origin: That’s just it–security LINE, as in singular. And it pretty much takes you to half the airport. Plus, even calling it a line is a bit much. We hardly had time to remove our shoes before it was our turn to go through. I suppose once people arrive in San Diego, they don’t want to leave.

But in Dulles there was an ocean of people in sixish lines weaving and winding to the point where you couldn’t tell where your lane was letting out.

When it was our turn to put our stuff on the conveyor belt, I noted that the posted TSA agent was literally getting paid to sit on a chair and people watch. He wasn’t making any announcements whatsoever about liquids, laptops, OR lozenges. (If that makes no sense, see previous post.) I told him I was preggo and didn’t want to go through the body scanner.

“So you’re able to see under people’s clothing by harnessing Superman’s powers?” Is what I wanted to say, but I know you don’t mess with TSA any more than you do TX, even this lazy TSA, so instead I answered, “I’d still rather not.”

“Couldn’t I just go through that?” I said, gesturing in vain to the poor nearly discarded relic of a metal detector, left standing there just to mock the likes of me.

And so I waited once again in disgrace to be called back for my humiliation. Then I caught sight of my tormentor.

Picture someone like this in a TSA uniform. You do NOT mess with her.

Have you seen The Secret Life of Walter Mitty? The one with Ben Stiller? Love this movie. Anyhow, remember the part in the L.A. airport where he tries to go through security with his fife tucked in the back of his pants? Then a hefty TSA woman picks him up and breaks him over her knee? Not the fife, mind you, but him?

Yeah, so that’s what this woman reminded me of. She was twice the size of the woman who frisked me in San Diego.

I stepped forward with a chill when her cold blue-gloved finger gestured for me. (“Two by two, hands of blue.”–Bonus for all you Firefly fans.)

She pointed out my optional private room. Once again, I chose to have witnesses. Then I had to put my feet on the mat, spread eagle, FACING everybody. It was bad enough before when my back was toward the on-lookers. Here I was in full view as this she-man nearly knocked me over several times with her uber-thorough pat-down.

After the third time of nearly falling over, I remarked, “You take this a lot more seriously than the woman in San Diego.”

“I would hope everyone took this seriously.”

“I think you’re just a lot stronger than she is.”

To her credit, the woman stopped her work on my left leg, stood, and with genuine concern asked, “I’m not hurting you, am I?”

“Oh, okay,” and she proceeded to inspect my left leg yet again.

Note to self: Do not make conversation with TSA. It just prolongs the process.

Then she asked me to lift my shirt above my waistband, and she tugged all around it, nearly pulling me over yet again.

But here was the VERY BEST PART! Have you ever noticed how old women like to stare? I saw one two rows ahead of me doing this at church recently. She had her head turned a full 90 degrees to stare at the face of the person on her right. Then she looked down at the woman’s clothes for several seconds before studying her face again. Next she turned to do the same to the young man on her left. There is NO WAY these people didn’t know she was staring at them. She was less than a body-length away. I can only wonder at why she was scrutinizing them so closely and blatantly. Deciding if they were dressed appropriately for church? Trying to work out whether or not she could take them in a fight?

And I wondered how awkward that must have been for the two she was staring at, sitting there motionless, pretending not to notice.

But now I know how it feels. An old woman stood not a foot away from my outstretched fingertips, getting a close-up of the entire show. I flirted with the idea of suggesting she take a picture. I stared back at her until she made eye contact. I hoped my expression would say, “Uh, do you mind?” clearly enough that she would go about her business, but instead she looked right into my eyes for a full three seconds before shifting her attention back for the good part: my chest pat-down, which also nearly sent me backward.

When it was finally over, I hastily got my shoes back on, collected my carry-on and my friend.

“You okay, there?” she asked, kind enough to not out-right laugh at my misfortune. “Looked like you nearly fell over a few times.”

“Yeah, I’m fine. If nothing else, I provided entertainment for all.”

On a premonition, I looked back. To my relief, Granny was getting a pat down next (because apparently pregnant women and old ladies are high on the terrorist watch list). I’m going to assume this lady was just watching me to see what she was in for rather than being a disturbing perv.

I hope the TSA woman doesn’t knock her down. Then again, I’ll bet Granny could take her.